Building of the National Commissariat of Internal Affairs

Building of the Ministry of Internal Affairs 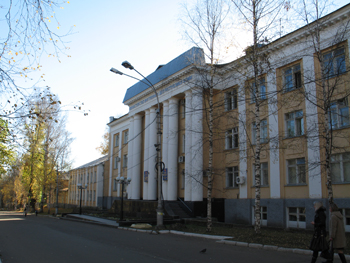 The author of the project - A.V.Zikeev.

The building erected in 1938 consists of several parts. The left wing was constructed in second half of XIX-th century. At that time in Ust-Sysolsk there were basically wooden houses and only merchants could build stone private residences. The two-storeyed apartment house belonged to the merchant Suvorov.

The building has a symmetric facade with an eight-columned portico in the center. In the late 1930-1940 s it was the most beautiful construction in symbolizing architecture achievements.

In the past May Day and October demonstrations were organized in front of this building, and its porch was used as a tribune.