Fire Service of the Ministry of Emergency Measures of 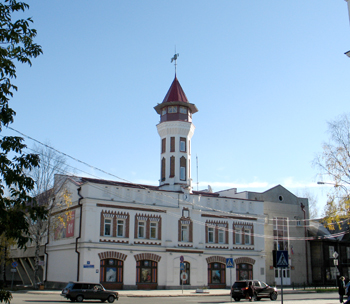 In September 1899 the architect I.I. Pavlov made the project of the Fire Depot building. The contractor N. G.Kononov invited masons from Solvychegodsk. The work was over in 1907.

After the reconstruction made in 1975, architectural advantages of the building were carefully kept.

In April 1976 the weather vane at the top of the tent was established. The special role in reconstruction of the building was given to the chiming clock on it’s facade.

In 1986 after the next restoration of the building the clock was repaired, the chiming music was heard but in half a year the clock was out of order again. The following repair was done by experts of the fire laboratory at the head of the engineer V. Lisin. Now the clock plays the melody about by the composer Jacob Perepelitsa.